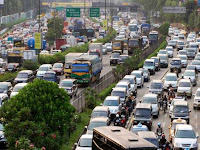 One of the perks (or burden to some) of being part of Indonesia's hottest industry is that travelling is part of the game, as there's no Coal mine in Java, so one has to fly to visit mine sites.

Early morning to Soekarno Hatta is an amazing experience. The sky's still dark and most of Jakarta's still asleep, even the roosters are still warming up their vocal chords before waking people up, but here the 8 lane toll road is packed with cars. Early morning traffic jam to the airport is part of jet warriors' rituals.

Most people in these cars are back asleep or at least still hazy from having to wake up at 4am. Some are nervous of missing their flight. Some are fuming in road rage. Some are lost in the thought of loved ones and some are simply lost.

But if one take the opportunity to ponder in midst of the chaotic dance of cars that the jam is, one shall find questions, what are these people doing? Where are they going? What is the significance of these daily early morning madness?

The half empty glass types will blame bad infrastructure (without appreciating the constantly improving toll roads), lack of public transport (without realizing the numerous private and public shuttles and busses available) or blame the too much cars (while also taking a car instead of shuttles), or simply just complain, as the half empty glasses do.

If one delves deeper. The morning airport jam is a significant indicator of the economy. Unless the economy is healthy, nobody will fly back and fro to fill the airport. The mushrooming number of airlines, with their hundred of jets won't be here unless there's a demand for it. Mind you, even with hundreds of flights daily, the seats are still mostly fully booked.

The constant movements of people indicate that there is money to be made in all corners of the country. Those who persevere and work hard are rewarded. Jakarta is not where the money is. It is spread all over Indonesia, as these jet warriors attest.

If Indonesian work hard and appreciate the wonders and blessings the country has, then Indonesia will have its deserved important place in the global community.

So people, stop bitching and do your job, or even better, create jobs. Indonesia needs you, me and all of us, even if we have to go through the crazy morning airport traffic, nervous of missing the flight.
Posted by Surya Cipta at 10:49 PM

Who Is Surya Cipta?

Surya Cipta is an Indonesian. A professional in the coal industry with experiences in IT, hospitality and entertainment industry.

An MSc in Telematics by education, his love for reading, travelling and continuous learning gave him a wide horizon.

A nerd at heart with diverse interests, from tech and gadgets, to aviation and aeromodelling, travelling, diving, science as well as social issues and watching the comedy of humanity.

His name is actually missing his family name. Being very fortunate to be born to one of Indonesia's prominent family, on this blog, it is intentionally left out as this blog is his personal thinking and viewpoint.

He can be followed and contacted in tweeter @scipta